The Rally was centred in the state’s mid-north around Burra with stages stretching from Mallett in the north East to Ulooloo in the north, then west towards Jamestown and Booborowie with stages around Hallett and Hallett Hill, and with a couple of new stages added – near 400 km competitive

The Service Park in Burra was at the Towns historic Paxton Square Cottages and was again a real feature. There are not many places, if any, where competitors can step out of their accommodation straight into their competition car. Additionally, the Community school’s oval was deployed for the first time and was a real bonus

Another feature was the fourth year that full competitive stages were run in the centre of Burra in the Heritage Monster Mine precinct, a rare privilege, and spectated by hundreds of locals.

It was “Rallying. Done Right”” and again turned the clock back for the sport in South Australia, as only the fourth blind event for many, many years.

Pace notes/Recce were not allowed, and that showed in the pace of the event – most stages under (some well under) 120kph average – a result that event management was hoping for, and one that was very similar to last year – so, nearly 70 crews, nearly 400km competitive, 17 stages, and zero incidents – a great result

The local paper, the PLAINS PRODUCER had a great article about us that went straight to the heart of our approach 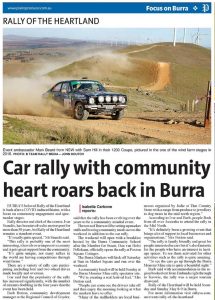 The event had a nice retro feel to it, and many commented on the relaxed ambience of the weekend. Our aim, with your help, was and is to make it easy for the competitor to enter and run

The stage results are here: – www.rallyresults.com.au/roth/2021

Events cannot happen without volunteer officials, and huge, huge thanks go out to the 200+ people that worked tirelessly to help execute our event. Our Stage Management Teams, Service Park Manager, Course Car Manager, Chief Safety and the MIVs, the A Team and their various groups of officials all did a great job.

All stages were fully manned, and ran largely on time and the UNFAILINGLY PLEASANT mantra has got through for sure

It’s a tough gig, it really is, and we really appreciate you all. I thank you all too for the positive impression you left with competitors, residents and spectators alike.

Equally, the managements of naming rights sponsor AGL, the landowners and residents along the route, and the local Goyder and Northern Areas Councils all contribute to enable things to happen. Thank you one and all – we know that we are privileged to rally in the windfarm precincts, the Mine heritage area particularly, and in the district generally, and hope we contributed to the region positively

More than 10 official photographers captured the action and scenery of the Rally of the Heartland over the weekend. Many of their shots are shown on our Facebook page

I would like to thank our various sponsors and supporters as well – without them, events like this would suffer, so let’s applaud AGL ENERGY, LIGHTFORCE PERFORMANCE LIGHTING, SHANNONS, BOILEAU, CMI TOYOTA, MITSUBISHI MOTORS AUSTRALIA LIMITED, and ARTCRAFT. Please buy from them or use their services whenever you can to show your appreciation of their support for our sport.

So too, our friends at The Regional Council of GOYDER, NORTHERN AREAS Council and WICEN, SAPOL, CFS, CAMS, all the RESIDENTS along the route, and of course all OUR ARMY OF VOLUNTEER OFFICIALS.

Awards have been allocated.  Lots of discussion and the final choices follow.

The Official of the Year Award

As always it was a difficult decision to pick a winner

There are many, many people putting in enormous amounts of effort and time. Beth and Bill Baillie in the Service Park, Scott Thompson with the MIVs, Tony Rowe with equipment, Iz Singe with course cars, the list goes on

After a lot of consideration, the award has been issued to Ros Fisher. Ros goes the extra mile in many and varied areas and has provided the leadership over 20 consecutive years that got over 1000, yes 1000 kilometres of Special stage set up and run. Impressive indeed. She is now retiring as a Stage Commander and this final accolade is richly deserved. We will miss you running a stage, but look forward to seeing you in other areas

Awarded to the Stage Commander of the stage judged as best set up by a range of observers, including the crew of 00.  The winner is NEWBIE and BOOBOROWIE (equal best).

Congratulations go to Phil and Sandra Matthews, and their team. This has yet again been a decision based on very marginal factors – all stages performed well, and everyone should be more than pleased with the jobs they did, and the way they were carried out. Close second were LONG, and MORE VIEWS. Well done to all

SPIRIT of the RALLY

Awarded to the person judged to have typified our event in attitude, helpfulness, willingness, just turning up and having the “can do” every event need

The award goes to JARED WALDRON. Thank you – you were everywhere! 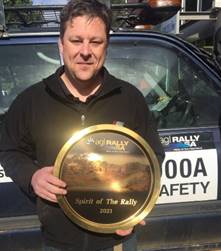 All competitors and service crews at the AGL RallySA – Rally of the Heartland were asked to bring toys to the event as part of their entry requirements. Well, everyone excelled at that, and many of Burra’s children were delighted with them at a toy handing over event at the Burra Early Learning Centre ahead of the start.

Check out the kids in the pictures. Thanks everyone, it was a great thing to do for a community that supports us – and is now the tradition going forward 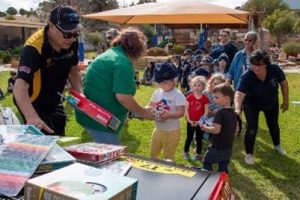 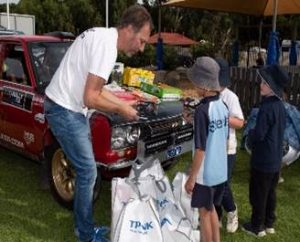 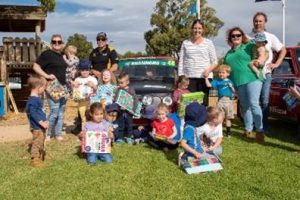 At the weekend the Rally was staged around Burra. One of the most delightful community events was the distribution of toys, on Friday, at the Burra Early Learning Centre. The Rally crews donate toys for the children of the district, the local Hospital and the Town Library. A big thank you to car 48, Hilary Evans and Doug Fernie and car 51, Glenn Bakker and Cathy Elliot for providing their Rally cars for the children to investigate. The photographs show how much the children enjoyed the event.

On a final note, everyone can and should be proud of our efforts in the Heartland, and I look forward to working with you all again. 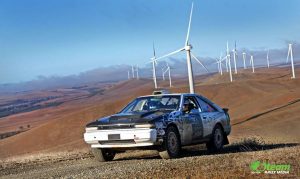 Photo by John Doutch – in the final stage – MORE VIEWS